SKU:
ND0133-52NM
Availability:
Usually ships in the next business day
Minimum Purchase:
10 units
Bulk Pricing:
Buy in bulk and save

This Neodymium Cylinder Magnet measures  3/16"x1/2" in thickness. The North and South poles are on the flat sides of these Neodymium Cylinder Magnets.  This Cylinder Magnet has a pull force of 9.9 lbs. This is a great Cylindrical magnet for use in personal projects as well as for crafts and closures and can also be used to help keep objects secured or fastened to any ferrous surface.  This magnetic Cylinder is patent licensed and made under the ISO 9001 quality systems.

Product Links to Other Closely Related To Your Search

PLEASE NOTE: All magnets may chip and shatter, but if used correctly can last a lifetime.  Keep away from pacemakers.  Not for children, parental supervision strongly encouraged.  COMMERCIAL USE ONLY.  If damaged please dispose of completely. Shards are still magnetized and if swallowed can inflict serious damage if magnets join inside the digestive tract.

Order your Neodymium Cylinder Magnets online or over the phone.

These are rare earth super strong neodymium Cylinder magnets and is made for holding stuff & that is what they do they do best!

Many Uses & Users For A Cylinder Magnet

About Neodymium In General

Neodymium magnets overall, are the world's strongest permanent magnets. Although, not all neodymium Cylinder magnets share the same characteristics. The Grade of a Neodymium Magnet will provide an idea of the strength of a neodymium magnet. The most common commercially available grades generally run N35- N52.  N35 is the weakest (but by no means weak) and N52 is currently the strongest. There are some special use grades as well. A larger piece of neodymium of a weaker grade may be ultimately stronger than a smaller but higher grade piece. Our strong Cylinder magnets are designed & manufactured to meet stringent quality standards of both external and our own standards.

This article will discuss the world of magnets from very different end users viewpoints.  Firstly the article is addressed to someone in a high school or maybe a 101 level in college to aid them in navigating this part of physics.  This portion of the article will also point to experiments that will demonstrate the points being made.

Secondly this post will address the “what does that mean to me?” group.  Usually consumers of magnets whether they are a hobbyist searching for a small magnet to hand a photograph, an organizer searching for a way to straighten up a workshop or a manufacturer in search of enough magnets quickly to finish a current run on a manufactured product.

Some portions of this article came from Wikipedia, the free encyclopedia and are being used under the creative commons share & Share alike clause.  Those portions may be used by anyone. Other portions belong to CMS Magnetics & Magnets For Sale & are copyrighted and may not be used without written permission.

The information given applies not only to the Neodymium Cylinder Magnets  but the composition of all Neodymium Magnets .

Ancient people learned about magnetism from lodestones (or magnetite) which are naturally magnetized pieces of iron ore. The word magnet was adopted in Middle English from Latinmagnetum "lodestone", ultimately from Greek μαγνῆτις [λίθος] (magnētis [lithos])[1] meaning "[stone] from Magnesia",[2] a part of ancient Greece where lodestones were found. Past civilizations learned of the existence of magnetism from, (curiously enough) a stone called magnetite (also called loadstone).  This was naturally magnetized pieces of iron ore. Some of this loadstone dangling on a stCylinder was actually the first compass. So with this man had discovered that there was a connection between the magnetism in that little rock and the earth.

The earliest known surviving descriptions of magnets and their properties are from Greece, India, and China around 2500 years ago. By the 12th to 13th centuries AD, magnetic compasses were used in navigation in China, Europe, the Arabian Peninsula and elsewhere.

Magnetic flux density A vector quantity measures Cylinder the strength and direction of the magnetic field around a magnet.

Magnetic flux density also can be understood as the density of magnetic lines of force, or magnetic flux lines, passing through a specific area. It is measured in units of tesla.  Also called magnetic flux.

Magnetic flux density is measured with a flux capacitor .   The measurements may be in either Gauss or Teslas. Both of these measures are named after scientist in the field.   A typical Gauss measure of a magnetic field of N52 ( the strongest Grade of neodymium may be 14,500 Gauss but measured in Tesla is 14.5 Tesla.  The ratio is 1 to 1000.

Nikola Tesla  1846-1945 Worked with both George Westinghouse and Thomas Edison in the early years of electrifying America.  He is known for his work in A.C. current and electromagnetism.

Fredrick Gauss 1777- 1855 was mostly a mathematician but also responsible for measurements of magnetic strengths.

In SI units, the strength of the magnetic B field is given in

Detecting magnetic field with compass and with iron filings

In SI units, the strength of the magnetic B field is given in teslas.[8]

A magnet's magnetic moment (also called magnetic dipole moment and usually denoted μ) is a vector that characterizes the magnet's overall magnetic properties. For a aa Neodymium Cylinder Magnet   , the direction of the magnetic moment points from the magnet's south pole to its north pole,[9] and the magnitude relates to how strong and how far apart these poles are. In SI units, the magnetic moment is specified in terms of A·m2 (amperes times meters squared).

This product is covered by a 10 year warranty on the magnetic strength under normal usage. Use in environments with high temperatures and vibrations will void this warranty. The product should not be used outdoors or in high humidity or salty environments except when extra insulation measurements are taken. 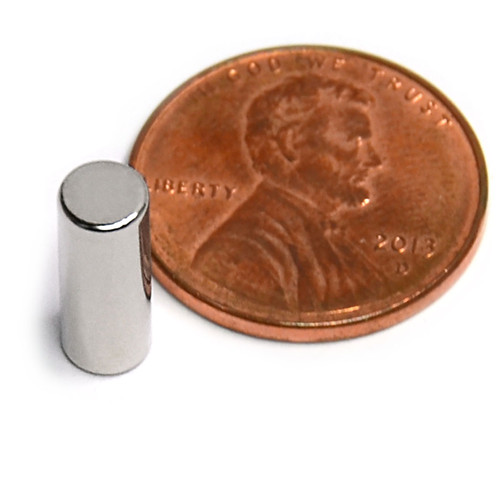